Stella Diamant initially wanted to be a vet until she realised that killing lab mice and being indoors weren’t for her. A trip to Madagascar as part of WWF’s Young Volunteer Programme combined with a passion for marine megafauna seeded a love for the country, its people and wildlife which led her to set up the Madagascar Whale Shark Project a few years later. Here she shares her journey, advice and encourages more early-career conservationists that you can set up your own project!

In these difficult times, young scientists with ideas, willing to take risks to pursue dreams or make projects come true, are needed more than ever. Climate change is real, habitat destruction is occurring at an unprecedented rate, and we desperately need both data and integrated approaches to see conservation projects succeed.

I can hear some of you say: but I don’t think there is funding, I don’t think anyone will find it interesting, I am not qualified. However, the fact that you are willing to invest your time and energy into a project makes you qualified. Quite often, projects don’t take off because substantial work needs to be done to bring it to life, and academics or senior scientists don’t have time to do such work.

I am sure most of you have one or more project ideas in mind, that you came across while working on another project, or traveling. First, dig deeper and read up on the literature and previous work. Has this been done before? If so, where and when? Could the original study be easily replicated? Are there limiting factors?

This is how I started to seriously question whether my initial project idea was viable, late at night when I couldn’t help but wonder ‘what if it really could happen?’.

Write down what you have in mind in a succinct proposal that you can eventually send to potential project partners. Ask for help from more senior peers, and while it might be disheartening, you want a solid piece of writing at the end of it.

In the meantime identify potential project partners or researchers that could advise you on how to develop your idea. Initially I sent my proposal to a Whale Shark scientist from Mexico, who helped me to identify funding sources and link me to current project partners. Do read up on local projects and contact local organisations. If possible, spend more time there investigating what else is going on, networking and generally cultivating a good reputation.

When you feel ready and you have a strong project proposal, do send the emails, request a meeting, present to colleagues and organisations. When preparation meets opportunity, you will be lucky. And if you are not, at least you found out and won’t wonder ‘what if’. The whale-shark rich’ waters of the Nosy Be archipelago where the MWSP is based.

The main misconception about starting up a project is that it should be easy because you spend a lot of time working on it, and since you have given up on another job, somehow you deserve its immediate success. Sadly, this is not how it works. The road to success is paved with struggles, rejections and self-doubt, and as I was told before: “If it was this easy it would have been done already”.

The beginning and ‘putting yourself out there’ part is the hardest, and I remember feeling awful, when I naively sent out unprepared emails to shark experts asking for help. I was told my CV wasn’t specialised enough, that I was too young, that if there indeed were Whale Sharks in Madagascar they would already be studied by experts. Being female did not help either.

Yet I kept sending these emails, and eventually knocked on the right door at the Marine Megafauna Foundation (MMF), whose Principle Scientist and Founder, Dr. Simon Pierce, became the project’s scientific co-supervisor. As Madagascar neighbours MMF’s field site in Mozambique, where Whale Sharks have seen a 79% decline since 2005, Simon was keen to find out if it is the same population. Indeed, the Whale Shark population in Madagascar had never been studied until the MWSP’s inception in 2016, so no one knew the size and structure of the Madagascar’s population.

A bit later, Simon put me in touch with Dr. Jeremy Kiszka, a shark specialist based at Florida International University who had extensive experience working in Madagascar and also wanted to investigate the Whale Shark population. Jeremy had been working with a whale watching company based in Nosy Be who had a strong interest in becoming involved in scientific projects, so Arthur & Tanguy, the brothers behind Les Baleines Rand’eau, became our on-site partners. We had a team!

To avoid being ignored or rejected you obviously have to highlight why you are the right person, but also leave room for improvement and give yourself the means to become the right person. By this I mean that you should accept that you need to learn still, even if you feel you have studied and volunteered enough, and don’t want to pay for more experience.

As a novice Whale Shark researcher, I had to obtain field skills. Don’t be fooled, while Whale Sharks seem relaxed they swim incredibly fast and the methods we use to study them, such as photo-identification, require training. While having a stable paid job, I found myself asking to volunteer at MMF’s fieldsite in Mafia Island, Tanzania, where I had to pay living costs and flights, but learnt an incredible amount – mostly that I needed to do freediving training – and met the team I work with now. Presenting with world experts at the International Whale Shark Conference IV in Qatar.

Another thing I witnessed before, and learned from experience this time, is that it’s okay to not be a senior expert on a species or field site, as long as you are surrounded by such people. That means accepting constructive feedback on a regular basis, constantly rewriting grant proposals and asking for help, because at the end of the day you need to use all the expertise you can get to convince funding bodies and other partners to work with you.

Stemming from that, maybe the most important thing when setting up and running a project is to extensively communicate with your project partners, and bear in mind their own interests. Your team need to share your vision, and often it becomes difficult to know what is going on when you are not in the same place or only communicate via email.

Of course as a research project I had certain aims in mind for the project, which were backed by the scientific supervisors, but these had to be reconsidered to match the needs of our local operator in Madagascar. I also realised certain things could not be rushed, or it would destroy all the trust and good work we had achieved so far. 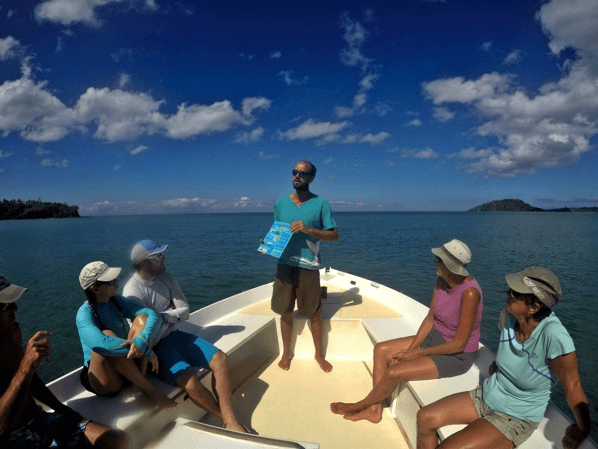 Finally, while some aspects of the project are incredibly fun and rewarding (you said Whale Sharks right?!), remember it takes work, sacrifice and long hours to prepare it all, and I often feel this dimension is overlooked.

Personally, I find the temporary nature of field seasons the project’s biggest downfall, as well as the constant struggle to secure funding. While it keeps me busy and excited for half of the year, I find myself constantly looking for various short-term jobs the rest of the time, as it is difficult to find paid work in marine conservation for only a few months per year.  This means financial instability, living out of a suitcase and being far away from friends and family. But that is the price to pay to do your dream job and fight for a cause you care about.

Find out more about the Madagascar Whale Shark Project here.